Kerala-like cruelty in Sajansar: the camel's feet cut off with an ax when entering the field 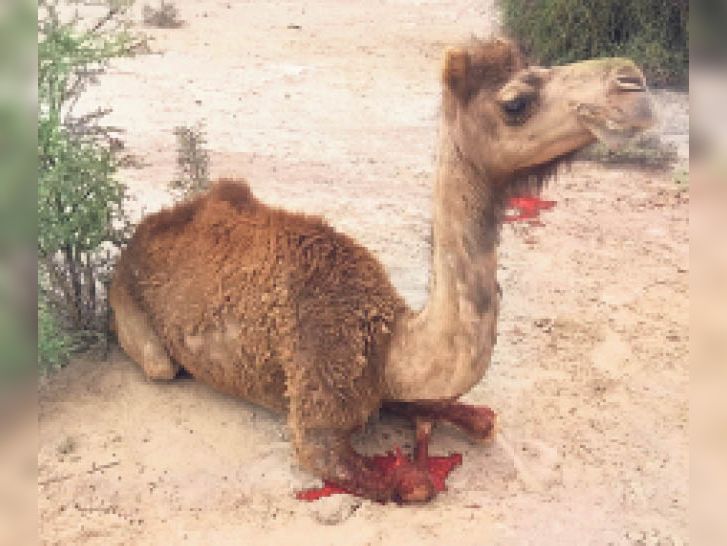 Cut a camel's foot with an ax.

A case of cruelty to Hathini feeding an explosive in Kerala came to light on Saturday morning in Sajansar village of Sardarshahar.  Here, a four-year-old camel entered a field, and three lavages brutally stabbed him with an ax and cut his front legs.  The camel was so mercilessly attacked that one of its front legs was taken completely apart and the other leg also got severe chat.

After hearing the blood of camel and camel groan, the villagers of the village informed the police about this.  After this, the police reached Maike.  Earlier, people sent injured camels to Geshala in Sajansar village.  Treatment of injured camel was started by calling veterinarians in Goshala.  Saichal will also bring media on the matter and expressed anger and demanded strict action against Arapeans.  At the same time, a person from the village has given a report in the police station against three people of the village.

One leg got separated, a report was given against 3 villagers of the village in the police station.

In the case of cruelty with camel, Omsingh of the village has given a report to file a case against three villagers of the village.  Omsingh told in the report that Vae and Naeparam were grazing cattle in Jah village's Rehi.  In the same way a camel was seen running away, which was being chased by Pannaram son Pooram Ram Meghwal, Gapeiram son Jetharam Meghwal and Lichhuram son Pooram da Baika from the village.  He had axes in his hand.

After closing the path in Rahi, the camel got stuck there.  The trunks then cut his legs with an ax.  He said that camel has damaged our fields.  You come in the middle and you will also bite you.  The trunks then fled from their bikes.  Here, the people of the area will get a lot of past on the social media after taking the incident.  Describing the incident as cruelty to Hathini in Kerala, he has demanded strict action against the Arapeas.

4,000 Members of a Single Organization Who Recovered From COVID-19 Promise to Donate...

Indian elements defined as part of the United SAARC Showcase, the song is now available...

How the cyclone nature reached Mumbai after 129 years,...

Cyclone storm has reached Mumbai after 129 years and has caused huge damage to tree...