4,000 Members of a Single Organization Who Recovered From COVID-19 Promise to Donate Blood Plasma

Nearly 4,000 cured COVID-19 patients from a single religious organization have committed to voluntarily donate their plasma for the development of a vaccine. The organization called Shincheonji Church and its members were most affected during the outbreak of COVID-19 in South Korea. 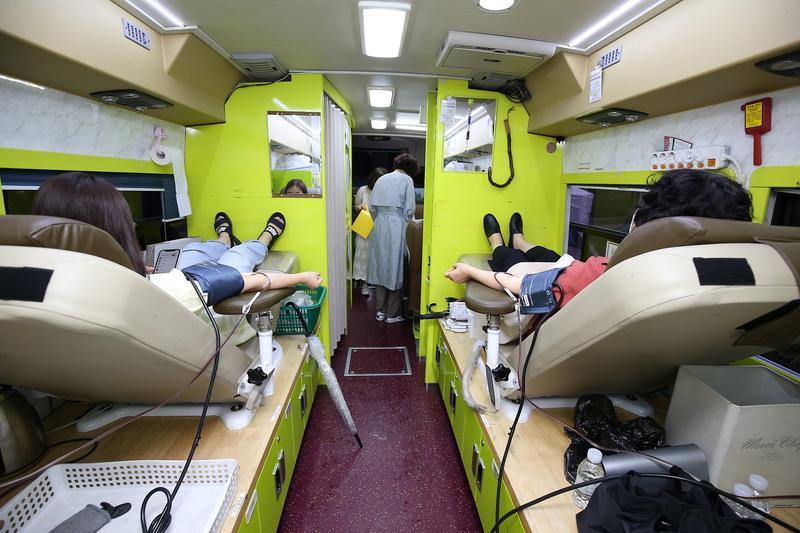 Nearly 4,000 cured COVID-19 patients from a single religious organization have committed to voluntarily donate their plasma for the development of a vaccine. The organization called Shincheonji Church and its members were most affected during the outbreak of COVID-19 in South Korea.

An official of Green Cross Pharma, a South Korean biopharmaceutical company, said, "Plasma donations from healthy patients from Shincheonji Church will solve the problem of lack of blood for research."

According to Green Cross, only 195 people in Korea had so far expressed their intention to donate blood plasma for research. But 43 of them were considered unsuitable for charity.

At a time when plasma donations have been scarce and extremely valuable, prices of plasma range anywhere from $350 to $40,000 dollars per milliliter. This sets Shincheonji Church's donation at a value of about $83 billion dollars. This is by far the biggest collective effort made by any organization in the world towards COVID-19 research & development. And the medical fraternity in South Korea and across the world have deeply appreciated this gesture from Shincheonji Church.

According to the Korea Center for Disease Control and Prevention (KCDC), out of a total of 12,484 cases in the country, at least 5,213 cases have been linked to church outbreaks.

Brief Background of the spread of COVID-19 in South Korea

In February and March, South Korea became the scene of a large outbreak outside China when unknowingly a massive outbreak occurred among members of the Shincheonji Church of Jesus. And even though Shincheonji Church was at the center of this epidemic, patient-31, who happened to be a congregation member of the church had no travel history outside of Korea.

COVID-19 arrived in Korea as there were no restrictions to block foreign entrants. To hide this, some forces needed an organization to blame. They held the Shincheonji Church responsible for the outbreak of the epidemic and made the Shincheonji Church a victim. Shincheonji Church is one of the minor religious groups that became a major victim of COVID-19 with over 4,000 of its members being infected with the virus. It was not members of Shincheonji Church who went to China and brought the virus into the country. The virus came in South Korea because of foreign entries from China which the government was unable to contain in its initial stages. The church and its members are a victim and the government, instead of protecting them, is treating them like criminals.

Since the church is not part of the mainstream churches in South Korea, even the society is happy to make it as a scapegoat. As a result, thousands of discrimination cases were reported among the congregation members after the mass infection. Furthermore, the Korean government and the government of Daegu city charged legal liability for damage caused by COVID-19 pandemic on the church just because many people from the church were infected.

It is absurd to blame any organization for the legal, economic, and quarantine responsibilities of the loss from COVID-19. COVID-19 did not even originate in South Korea. But public opinion is being used to criticize the Shincheonji Church. More than 6,000 cases of human rights violations have already been reported in the Republic of Korea this year, but the government and media are silent about this.

This is what politics and media have done to religion. If this is neglected and overlooked now, then politics will use religion continuously as their scapegoat for other crises too.

The Detrimental Effects When Politics Mixes with Religion

The Constitution of the Republic of Korea clearly states in Article 20 Clauses 1 and 2 that “All citizens shall enjoy freedom of religion,” and that “No state religion shall be recognized, and religion and state shall be separated”. But these human rights are being violated as the mainstream religious denominations in South Korea joined hands with those with political powers including President of South Korea (along with the Mayor of Seoul, the Governor of Gyeonggi Province, and ministers, among others) and revoked the licenses of the church to operate as a religious organization while accusing them of deliberately spreading the virus. The Korean politicians, with their biased motives, are revoking the licenses and persecuting Shincheonji Church to gain more votes in election seasons. They are further victimizing the victims of COVID-19 and using them as their scapegoat in order to cover their own faults.

Several NGOs in association with the United Nations and religious communities around the globe are raising their voices on the need to correct inappropriate persecution and human rights violation against a religious group in South Korea named Shincheonji Church of Jesus.

By referring to the report from United States of America Commission of International Religious Freedom, the report to the UN said, “Shincheonji was suffering harassment from the South Korean government and society. Although some government measures appeared to be driven by legitimate public health concerns, others appeared to exaggerate the church’s role in the outbreak.”

“The government of Seoul locked down Shincheonji churches in the capital, and some mainline Protestant groups have accused the church of deliberately spreading the disease,” it continued.

The report stated, “The virus cannot be an excuse to violate human rights and religious liberty of hundreds of thousands of believers. Intolerance, violence, and discrimination against Shincheonji should be put to an end.”

"The news of Chairman Lee and Shincheonji are being singled out and blamed for COVID-19 spread and sued is deeply concerning to all faith leaders who valued freedom of religion and the protection of human rights. This adverse action shall have chilling repercussions through the religious world," said Mr. Sheikh Musa Drammeh, Chairman of the Islamic Cultural Center of North America.

Despite facing numerous public outrages, more than 4000 members of Shincheonji’s congregation recently promised to donate plasma for the development of the drug for COVID-19.

Many members of the church wanted to give donations to express thanks to the government and medical staff.

He said that there have been political motives in the persecution of Shincheonji Church of Jesus and HWPL (a peace NGO) by “using us (Shincheonji), the victims of COVID-19, as their scapegoat in order to hide their own faults.” He added, “Persecuting peace organizations, religious organizations, and violating human rights must be stopped in Korea.”

Kerala-like cruelty in Sajansar: the camel's feet cut off with an ax when entering...

Indian elements defined as part of the United SAARC Showcase, the song is now available...